Investigation into the identity of Maria Lakeman-Van Waardenburg, born 31-3-1868 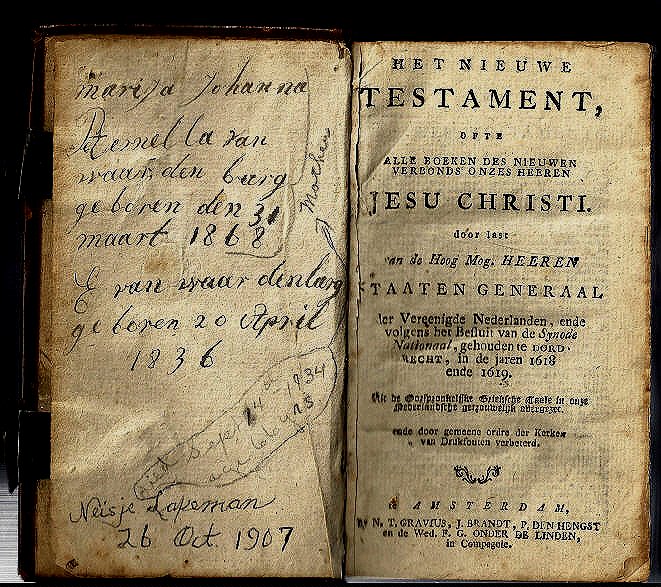 On the left page of this bible we see 3 handwritten names.

Above this name a speech bubble was drawn with the text:

But who is who, mentioned on the left sheet of this Bible?

To begin with the name Marija Johanna Peternella van Waardenburg.

When I received in 2004 a family-tree ‘Lakeman-Beemster’ made in 1986 I found Maria (Mary) Johana Petternella Von Vaadenburg-Amsterdam, born March 31, 1869,

for a long time I assumed Marija Johanna Peternella van Waardenburg, born on March 31, 1868, could have been born at Amsterdam.

But is that true?

It is known and established that Maria acompannied by Jan Lakeman (born 1859) arrived from Rotterdam on March 10, 1984 with the ship "Dubbeldam" in New York.

According to the passenger list on www.libertyellisfoundation.org Maria van Waardenburg was by arrival 25 years of age.

After arrival Jan and Maria left for Bangor, South Dakota, USA where they get married on March 31, 1894.

In a registration of the Detroit census from 1900, Brown County in South Dakota her first names are indicated as Maria JB.

Also it is already known Neisje Lakeman is a daughter of Jan Lakeman and Maria van Waardenburg.

In various pedigree data the surname of Maria is listed as Von VAADENBURG/VAARDENBURG, Van VAADEBURG or Von VAADENBURG-AMSTERDAM.

Was she - in view of the last name - previously married to a man with the surname Amsterdam, or was meant here the place Maria was born ?

I assume the second option, otherwise I would have encountered the marriage with Amsterdam before.

Given the many variations of Maria's surnames, it is almost certainly writing errors caused by using a different language (English).

It was usual at that time daughters were named using the grandmothers first names.

In any case we have the name Van Waardenburg with first names Maria Johanna Petronella, born on 31 March 1868.

I didn’t found anyone with this surname (in combination of this order of first names with the date of birth) in various Dutch and foreign archives.

Then the name E van Waardenburg.

An investigation about  the second person written in this Bible, E van Waardenburg did not give any results at first.

With the help of an employee from the Regional Archives Rivierenland I discovered the following track:

The family card from the population register of Kapel-Avezaath by Matthijs van Ooijen (1823 in Zoelen) showed that this man was married to Dirkje van Waardenburg, born on September 12, 1829 in Zoelen.

In the archives of the registry office of the municipality of Zoelen I found a birth certificate, number 19 in which Dirk van Waardenburg, 35 years old, makes a declaration of birth on 20 April 1836 of a daughter named Elizabeth.

Given the name and date of birth, this could well be the E van Waardenburg from the Bible.

Also the fact this Elizabeth is mentioned along with her sister on the family card of Matthijs van Ooijen, further research is justified.

And now the Van Waardenburg family.

On February 7, 1842 Dirk van Waardenburg, 42 years old (father of Elizabeth) at the registry office in Zoelen, declares the birth of a son named Marinus.

The mother is named Johanna Pitronella Maria Grazell and is then 32 years old.

From the records of the civil registry of the municipality of Beesd, marriage certificate 12 from 1867, it appears that Marinus van Waardenburg, then 33 years in marriage with Neeltje Krul, aged 27 years.

From data from the registry office of the municipality of Zoelen, birth certificate 16 from 1868 it becomes clear that Marinus van Waardenburg and Neeltje Krul had a daughter named Johanna Pietronella Maria on March 31, 1868.

The role of aunt becomes confirmed on the family card from the population register of the municipality of Wadenoijen-Drumpt from 1890-1900, page 186.

Here we see as head of the family Jan Cornelis van Ooijen, born 1860.

Jan is the son of Matthijs van Ooijen (1823) and Dirkje van Waardenburg (1829), the sister of Elizabeth.

Matthijs will come back later with the number  1.9.2.

Finally the line Van Ooijen, so this name occurs with both Dirkje van Waardenburg and her sister Elizabeth.

Mattheis and Cornelia got 11 children.

The 2nd child is:

On 2 May 1872 this Gerrit married at Wadenoijen with Elizabeth van Waardenburg.

The 9th child  of Matthies and Cornelia is:

He married 1 September 1820 in Wadenoijen to Metje van Santen, born 1791 at Geldermalsen.

Jan and Metje have children with the 2nd kind:

Matthijs is married to Dirkje van Waardenburg on August 26, 1853 at Zoelen.

Matthijs and Dirkje have a son:

This is the Jan Cornelis where "aunt" Elizabeth van Waardenburg lived in later life.

Visit the municipal archives of The Hague to confirm the emigration of Johanna Pietronella Maria van Waardenburg.
The results will be in the next update of genealogy-lakeman.nl.

The entry in the Bible is incorrect and incomplete.

She was not born in Amsterdam, but in Gelderse Zoelen.

The first name of E van Waardenburg must be Elizabeth.

The family bond between Maria and Elizabeth van Waardenburg is niece and aunt.